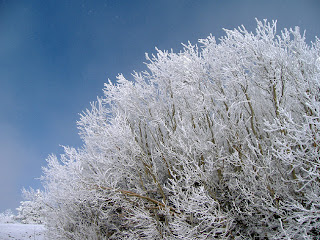 On the second day of our trip, we set out to hike Bill Williams Mountain. We were rested, well fed, happy to be away from cell phones and laptops, and generally psyched to get physical. In our pre-trip Internet research, this hike was billed as a moderate 2.75 mile hike. Cool, we thought. A few hours, we thought. Take it easy on the first day, we thought.

Well, we’ve hiked many trails and many mountains over the years, and this hike was not 2.75 miles. It was closer to four, which meant eight, round trip. Not so big of a deal if we had known, but there’s a psychological element to hiking that is very important. I tell myself, “I’m almost there,” based on the knowledge given, and I speed up and muscle to the top, exhilarated. I love that feeling of getting to the summit, sweaty and conquering. But if that last half-a-mile turns into two additional miles at a steep grade, well, let’s just say I get a little cranky. The deep snow didn’t help. As we neared the summit, the drifts were three feet deep in some places. And in Arizona (go figure!) they don’t blaze the trails. So here’s the thing: You pour a buttload of snow all over a mountaintop, and any trail pretty much vanishes.

Thankfully, some intrepid soul had been on this trail perhaps a week before and there were remnants of tracks to follow. Without those, we’d still be wandering around looking for the trail. Unfortunately, when we reached the 9,000 foot summit, we were in the midst of a snow squall. It made for cool conditions, to say the least, and almost zero visibility. But we took some lovely shots of trees against the sky. (Yes, it’s blue above the trees–the snow clouds were around and below us, but not above.)

At the top, we broke out the stove we had rented from a Flagstaff outdoor store, hoping to make some hot drinks to fortify us for the trip down. (We have our own trusty equipment but you really can’t fly with fuel canisters in your bag.) Unfortunately, we discovered that the store had sold us the wrong canister. It didn’t fit the stove! (Yes, we should have checked.) More utter crankiness, especially from Len who really enjoys cooking in the cold. (And good thing we’d packed water instead of relying on melting snow!) So, we put away the stove and chewed our half-frozen Cliff bars…my very dark chocolate was like dusty pebbles, it was so cold. It didn’t even melt in my mouth! I finally just swallowed the pebbles.

Then we left the summit, which wasn’t all that fabulous, given that the view was clouds–oh, and six million dollars worth of communications equipment–towers, dishes, buildings–marring the summit. For the first part of the descent, I donned my snowshoes. I should have had them on before–my feet were wet and cold from slogging through the snow–but again, I kept thinking we were almost there…Anyway, at the bottom, it was like a different day. The sun was out, the snow was melted, and it was almost 50 degrees, and I was happy. I love mountains. And I love being done.