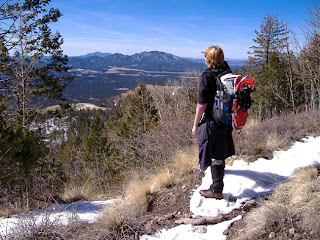 The day after hiking Bill Williams Mountain, the weatherman promised it would be sunny and clear, 50 degrees and warm with no wind. It was the perfect day to tackle the second highest peak in the area: Kendricks Mountain.

In 2000, lightning ignited a devastating fire on the mountain that burned over the course of several months. The blackened, armless poles all over the ground and reaching into the sky were a tragic reminder of the violence of nature, but in an ironic twist, the lack of trees made for spectacular views. At the base of the mountain, there was almost no snow, but the higher we hiked, the more snow we encountered. At the open area just below the summit, the snow reached its deepest point–about five feet–as could be confirmed by the sign for the trailhead barely peeking out above the snow.